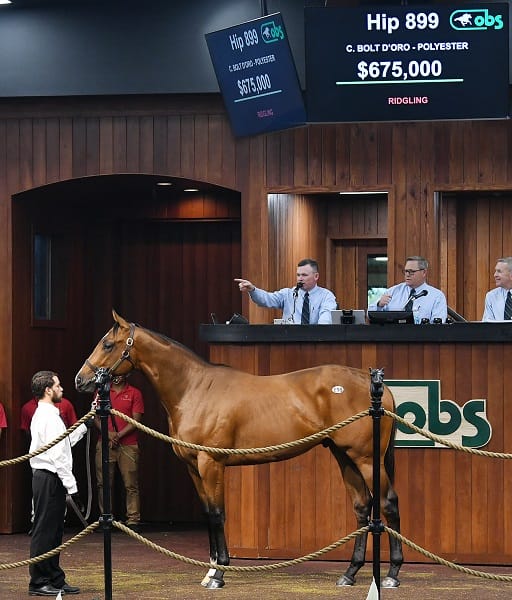 Thursday’s session of the OBS Spring Sale of 2-year-olds in Training showcased Bolt d’Oro’s highest-priced individual through the first three days of the auction when hip No. 899 brought a top bid of $675,000.

The colt was the sixth lot by his sire to bring a minimum of $200,000 thus far. The sale closes on Friday, with four more Bolt d’Oro’s scheduled to sell.

Thursday’s spotlight was squarely on the de Meric Sales, agent consignee, with the partnership of Leon Ellman, Laurie Plesa, and Glassman Racing the winning bidders. The colt was bred by the consignor along with France and Irwin Weiner.

“Having this one and seeing him when he was a day old over at Ocala Stud when they foaled him, we knew when we saw those angles and we saw him stand up, this was a special horse,” said Tristan de Meric.

The dark bay colt is out of the unraced mare Polyester, who is the dam of Pimlico Special (G3) winner Harpers First Ride, as well as the 3-year-old Klugman, who has won two races at Gulfstream Park this winter.

“We fully own Klugman,” Karl Glassman said. “But this colt is a partnership and Eddie Plesa will train him, so he will stay in Florida.”

In addition to having a terrific OBS Sale, Bolt d’Oro got his first winner as a sire when his first runner Pop d’Oro was a debut winner on April 13.