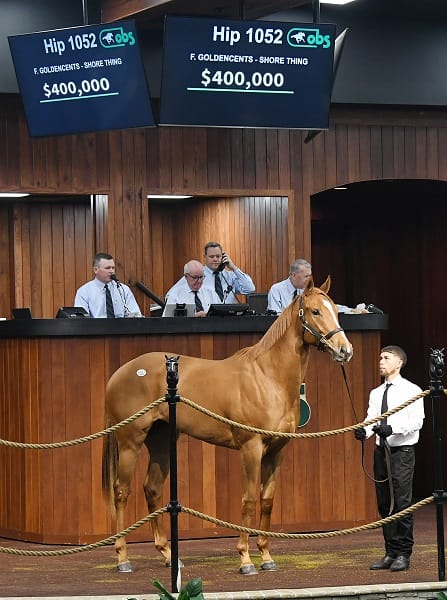 Goldencents wrapped up an excellent sale for his offspring with a $400,000 filly during Friday’s closing session of the OBS Spring Sale of 2-year-olds in Training.

Consigned by Dynasty Thoroughbreds as hip No. 1052, the filly sold to Alex and JoAnn Lieblong. Previously, K & E Sales purchased the filly for $42,000 at last year’s OBS October sale.

The chestnut filly had worked a furlong in 10 seconds flat at the Under Tack show, and was the second-highest price for Goldencents of the sale, behind only his $535,000 colt that sold on Wednesday.

The filly is the second foal out of Shore Thing, whose dam Conway Two Step was a stakes winner and is a half-sister to Glittering Tax, the dam of Temple City’s three-time Grade 1 winner Miss Temple City.

As he has done each year at stud, Goldencents is at the tops the sire list for his generation in several categories, currently leading this year by progeny earnings black type horses, winners and graded stakes horses.