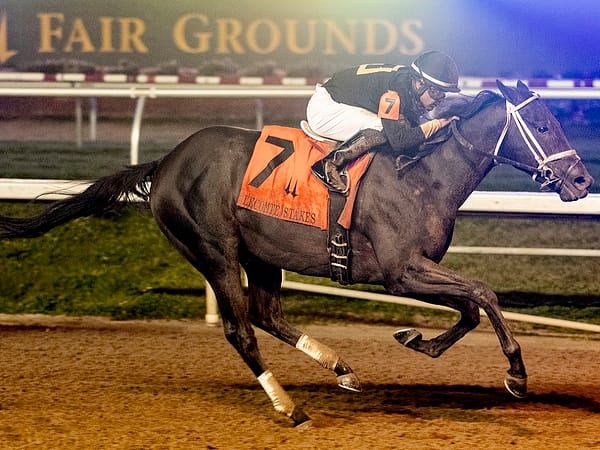 Instant Coffee started off his 2023 campaign with a rousing victory in Saturday’s $200,000 Lecomte S. (G3) at Fair Grounds. The 1 1/16-mile race is the track’s first leg in the series of prep races for 3-year-olds on the Kentucky Derby (G1) trail.

The son of Bolt d’Oro picked up 20 qualifying points and now has a total of 32 (second best on the list) on the Road to the Derby series, which Churchill Downs uses to determine starters in the Run for the Roses.

Making his first start since winning the Nov. 26 Kentucky Jockey Club S. (G2) at Churchill, Instant Coffee was ridden patiently by Luis Saez, trailing the field through a half-mile in :47.19. Instant Coffee began to make up ground on the leaders midway on the turn and was in full flight turning for home. He surged past the field to take the lead with a furlong to run and came home a 2 ½-length winner over Two Phil’s.

“I think (on the turn) he really started picking it up, stayed on real well down the lane,” trainer Brad Cox said. “It looked like there was pace to run at, and oftentimes in these 3-year-old races (around) two turns, you do have pace to run at. Luis did a good job, got him to the outside and he stayed on down the middle of the track.”

Instant Coffee, owned by Gold Square LLC, has won three of four starts and earned $442,815. The dark bay was bred by Sagamore Farm, LLC and sold to his owner for $200,000 at the 2021 Keeneland September Yearling sale.

Instant Coffee was one of Bolt d’Oro’s six stakes winners that helped propel the Spendthrift stallion to the top of the 2022 First-Crop sire list. Bolt d’Oro is standing this year for $35,000 live foal.