By My Standards eclipses $2M mark in Oaklawn Mile 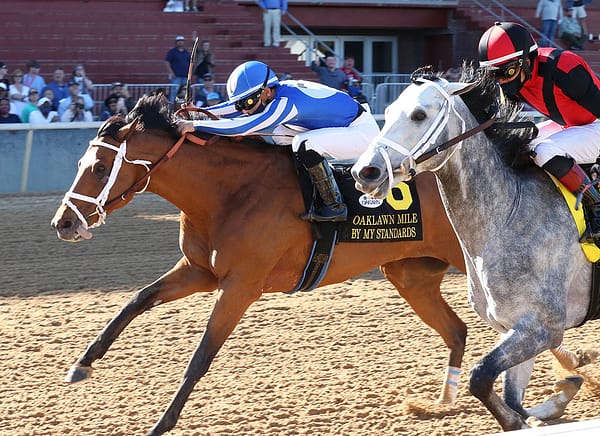 Goldencents’ all-time leading earner By My Standards surpassed the $2 million milestone in earnings Saturday with a thrilling win over Rushie in the $400,000 Oaklawn Mile.

By My Standards, who was making his first start of his 5-year-old campaign, got his first victory of the year despite a wide trip all the way around the Oaklawn oval. Rushie, meanwhile, was along the fence on both turns and got the jump on the field coming into the stretch and looked like a winner with a furlong to run. By My Standards, who was five or six wide, came flying late and got the head-bob to win by a nose in 1:37.82 on a fast track.

“Watching it live, I thought he did (win). But when I started watching the replay, I thought he might have gotten beat on the bob,” trainer Bret Calhoun said. “He was really ready. He really was well prepared, but I was more concerned about the short stretch mile (finished at the 1 1/16-mile pole), honestly. He’s just a really good horse and he keeps overcoming.”

Bred in Kentucky by Don Ladd out of the black-type winning Muqtarib mare A Jealous Woman, By My Standards was a $150,000 purchase at the OBS Spring Sale of 2-Year-Olds in Training in 2018.

Goldencents, who was the leading Third-Crop Sire of 2020, sits atop this year’s Fourth-Crop list with more than $1.7 million in progeny earnings and 39 individual winners to date.