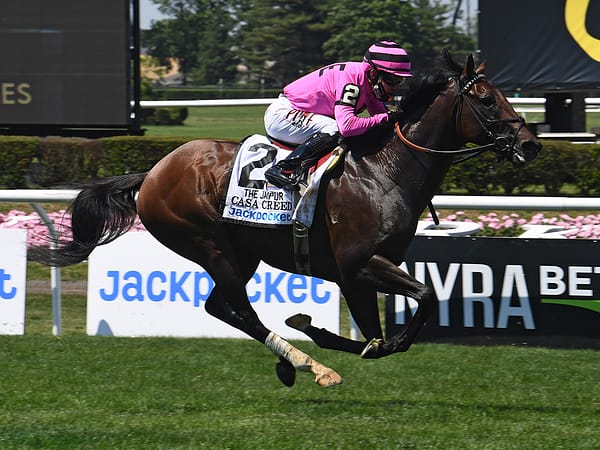 In the top 10 on the cumulative and 2021 Fifth-Crop sire list, Jimmy Creed has sired 35 stakes horses, second-most of any sire of his generation, and the winners of more than $12.9 million.

Casa Creed took his sire’s record to new heights with a stellar stretch run on Saturday. Away from the gate a beat slow, the 5-year-old was second-last in the field of nine. Bound for Nowhere set a very hot pace of :22.06 and :44.65, with Casa Creed still in eighth at the top of the stretch. Shifted to the middle of the course, Casa Creed flew past the entire field in the final furlong to finish the six panels in 1:08.04 on the “good” turf.

“I missed the break a little,” winning rider Junior Alvarado said. “I got worried right away because when sprinting the last thing you want to do is break slow. The first sixteenth of a mile, I was last and he was going so fast. I was thinking that they had to be going pretty quick up front. As soon as I turned for home and put him in the clear, I asked him a bit and then he pulled the reins out of my hands. It was a beautiful run from the three-sixteenths to the wire.”

Casa Creed is owned by Lee Einsidler’s LRE Racing and Mike Francesa’s JEH Racing. Casa Creed now has four stakes wins, including the National Museum of Racing Hall of Fame S. (G2), a record of 5-3-3 in 20 starts, and earnings of $755,408.

Casa Creed was bred in Kentucky by Silver Springs Stud. Out of the Distorted Humor mare Achalaya, he is a half-brother to graded stakes winner Chess’s Dream. Achalaya was bred this year to Omaha Beach.