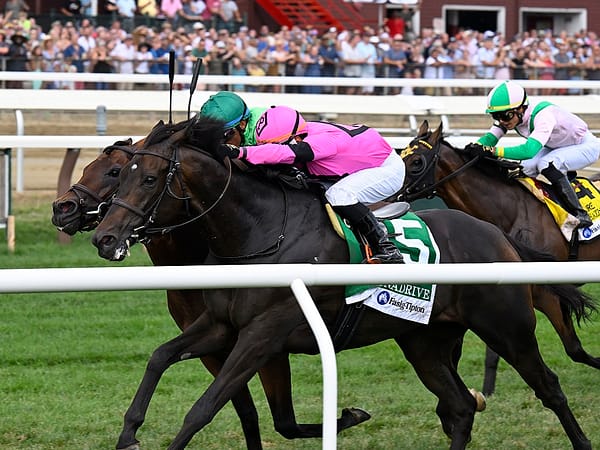 Dynadrive battles to victory in the 2022 Lure S. – Joe Labozzetta/NYRA

Dynadrive’s thrilling win in the $135,000 Lure S. at Saratoga was the first of two stakes wins Saturday for the offspring of Temple City.

Dynadrive was unhurried early in the 1 1/16-mile Lure, with Somelikeithotbrown rocketing to the front and opening up a six-length lead after a quick half-mile of :46.05. Dynadrive was about 20 lengths behind at that point, but the pace took its toll on the leaders and the field bunched up on the turn.

Dynadrive was in full flight coming into the stretch and weaved his way between horses to find an opening on the rail. He dueled with Shifting Sands (GB) through the final furlong, out gaming his foe by a head to stop the timer in 1:39.83 on the firm turf.

“There was a lot of speed in the race with the horse on the outside. I just tried to get him to relax,” jockey Eric Cancel said. “I got him where I really wanted to be and everything just worked out very well.

Dynadrive is owned by Flying P Stable and James Schurman. He banked $74,250 in victory, while improving his record to 24-8-5-2.

Bred in Kentucky by Spendthrift Farm, Dynadrive, out of the Rockport Harbor mare Harbingerofthings and is a half-brother to Bernard Baruch H. (G2) winner Tell Your Daddy. Dynadrive originally sold for $100,000 at the 2018 Keeneland September Yearling sale.