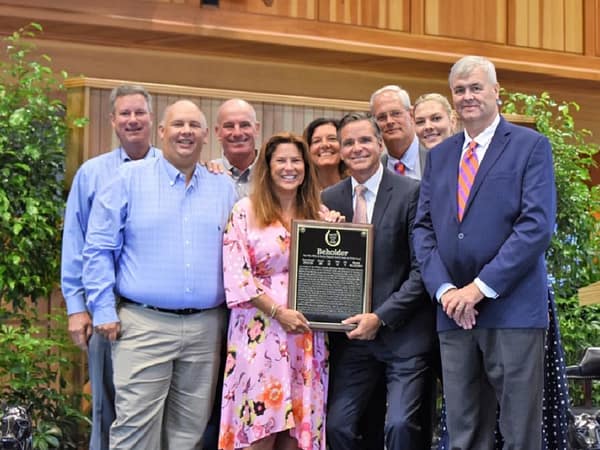 Spendthrift Farm’s brilliant filly Beholder became a member of the National Museum of Racing’s Hall of Fame on her first year of eligibility at the induction ceremony held in Saratoga on Aug. 5.

“I’m not surprised. I think she made that impression on people with her record,” said Beholder’s trainer Bill Mott, a Hall of Famer himself. “She has done things that either not many or no horses have done. Fillies and mares running 1 1/4 miles under two minutes? I’m not saying none have, but I don’t know that many have. And to win a Grade 1 at 2-3-4-5 and 6, I think, speaks for itself.”

“Well, the Pacific Classic was just breathtaking,” Mandella said. “And then the last race (2016 Breeders’ Cup Distaff), to beat that great mare that ran second of Mr. Porter’s, Songbird.”

Beholder was bred in Kentucky by Clarkland Farm and purchased by Spendthrift Farm at the 2011 Keeneland September Yearling Sale for $180,000. Out of Leslie’s Lady, she is a half-sister to Spendthrift champion sire Into Mischief and Grade 1 winner Mendelssohn.