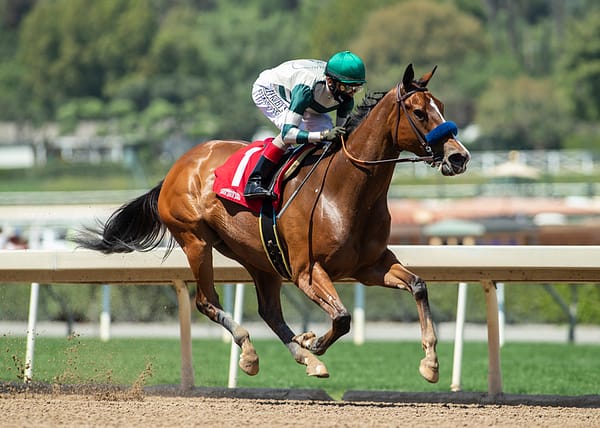 Into Mischief’s champion female sprinter of 2020 Gamine got the new year off in style on Easter at Santa Anita Park with an easy-as-you-please five-length victory in the Las Flores S. (G3).

Gamine thoroughly outclassed her three rivals right from the start of the six-furlong race. She took the field through a half-mile in :45.77 with a length and a half lead, then opened up in the stretch while being hand-ridden by John Velazquez. She galloped under the wire in 1:09.52.

“[The fans] saw one of the greatest fillies I’ve ever trained going one turn,” said Gamine’s Hall of Fame trainer Bob Baffert. “Hopefully we’ll stretch her out. (Owner) Michael Lund (Petersen) has been a great supporter of mine. I told him I was going to give her a little race but the purse isn’t very big. But he was excited he said, ‘I want to see her run.’ So when you own one like that it’s fun to see them run.”

Gamine now has won four graded stakes, the previous three all Grade 1 events during her championship season, and has earned $943,000. Bred by Grace Thoroughbred Holdings, Gamine sold for $1.8 million to Petersen at the 2019 Fasig-Tipton Midlantic 2-year-old sale.

Baffert indicated that Gamine would make her next start on the May 1 Kentucky Derby (G1) undercard in the $500,000 Derby City Distaff S. (G1).

Into Mischief had a spectacular Easter weekend that included Twenty Carat taking the Beaumont S. (G3) at Keeneland and Mischevious Alex getting his first Grade 1 win in the Carter H. Saturday at Aqueduct. The new trio of stakes winners gives Into Mischief a total of 16 on the year, more than half of his total of 29 during his champion sire season of 2020.