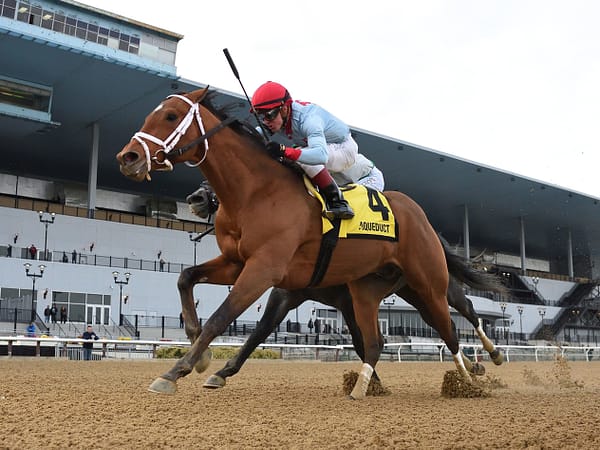 Lugan Knight fended off  a stern challenge to win Saturday’s $150,000 Jerome S. at Aqueduct. The one-mile race is traditionally New York’s first race on the calendar for 3-year-olds seeking to make their way to the Kentucky Derby (G1).

Lugan Knight was the first of two stakes winners on the day for Goldencents, with Empire of Gold taking the $75,000 Sam’s Town S. later at Delta Downs.

Going a mile for the first time, Lugan Knight and Arctic Arrogance were locked into a one-two battle the entire trip. Lugan Knight, under Dylan Davis, led through the first five furlongs before Arctic Arrogance came right along side the pacesetter. The duo were on even terms until the final sixteenth, when Lugan Knight dug in and took control, winning by a half-length in 1:37.77 on a “good” main track.

“I was happy with the way the horse broke,” said trainer Mike McCarthy. “He found himself prominent early and it looked like around the turn he still had a little bit of run. I was not surprised to see how well he dug in down the lane. It looked like he was always just going a touch better than the other horse.”

“We’ll see,” said McCarthy of the Withers. “I’ll have to give Dylan a call and ask him what he thinks and go from there. A mile was a question mark for me but it looked like he passed that test today.”

Bred and owned by BG Stables, Lugan Knight is out of Sly Roxy, part of a talented family that includes his second dam Roxy Gap, herself a MGSW in Canada, who produced GSW Cafe Americano.