Into Mischief continues to put up lofty numbers at Keeneland sale 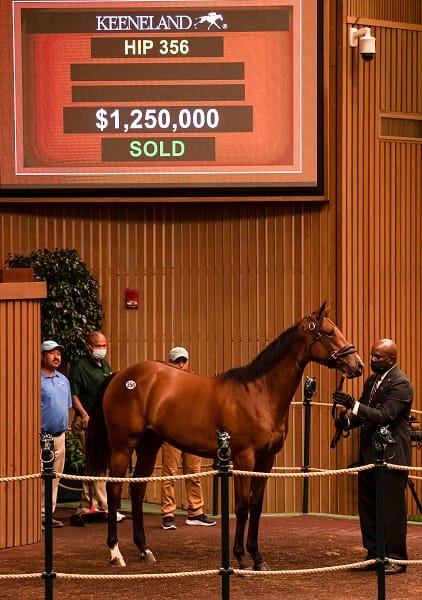 For the second day in a row at the Keeneland September Yearling sale Into Mischief was represented by a seven-figure juvenile.

Tuesday’s highlight was hip No. 356, a filly consigned by Bluewater Sales, agent, and purchased by Spendthrift Farm for $1,250,000. The final price was the top figure paid for a filly during Tuesday’s session.

The bay filly, bred by the China Horse Club, is out of Embellish the Lace, winner of the historic Alabama S. (G1) and herself a half-sister to Travers S. (G1) winner Afleet Express and the multiple stakes winner Reporting for Duty. This is also the family of Florida Derby (G1) winner Materiality and Gazelle S. (G2) winner and Kentucky Oaks (G1) runner-up My Miss Sophia.

“She’s just a beautiful filly, obviously by the right sire out of a Grade I winner; great depth of family,” said Spendthrift GM Ned Toffey. “She sort of ticked all the boxes, as classy a filly as we thought there was in the sale. We’re really excited to have her. Sometimes you see that pedigree and you’re disappointed in the physical, but there’s nothing disappointing in any way about this filly.”

With Book 1 complete, Into Mischief’s average was $640,000 from 20 lots sold. The two-time champion sire is also currently the only North American stallion who has had three yearlings bring at least $1 million this year.