Into Mischief strikes with two $1 million yearlings at Saratoga sale

Into Mischief’s star power was on full display Monday evening with a pair of $1 million colts at the Fasig-Tipton Saratoga Yearling sale. His overall results Monday closed with five lots selling 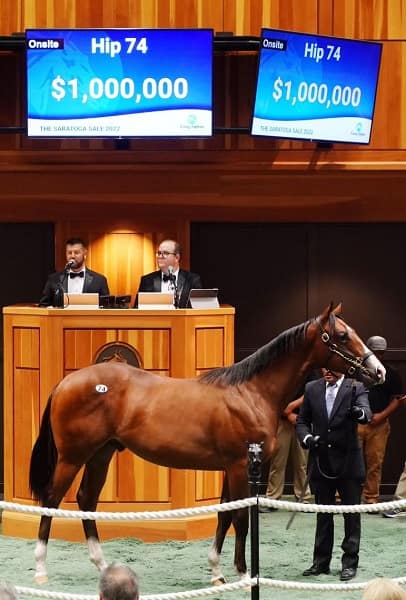 The stellar results came right after a huge weekend that saw Into Mischief tally four stakes winners, three of them graded, topped by Life Is Good’s victory in the $1 million Whitney S. (G1).

Hip No. 74 was Into Mischief’s first million-dollar purchase. Consigned by Blake-Albina Thoroughbred Services, Agent, the colt went to Japanese buyer Hideyuki Mori. This was Mori’s first trip to this particular sale.

“We knew this was the best horse we bred this year,” Hanzly Albina said of the colt. “He’s always been good.”

The bay, who was bred by Maurice and Samantha Regan’s Newtown Anner Stud, is out of Shopit and is a full brother to stakes winner and Hopeful S. (G1) runner-up Shoplifted.

The last Into Mischief offered during the session was hip No. 102, a colt consigned by Lane’s End, Agent. Spendthrift Farm teamed up with Cypress Creek and St. Elias Stable to go to seven figures for the bay youngster. St. Elias bred the colt.

“We are partnering with Mike Moreno, Cypress Creek and St Elias, who was selling the horse is going to stay in for a piece,” Spendthrift’s Ned Toffey said. “They are people we have partnered with before and we’re really happy to partner with again. Obviously it gives you a lot of confidence that the breeder wants to stay in.”

The colt is the first foal out of graded stakes winner Teresa Z and his third dam is My Flag, a multiple Grade 1 winner of more than $1.5 million and dam of champion Storm Flag Flying.

Into Mischief has nine lots in this evening’s closing session of the sale.