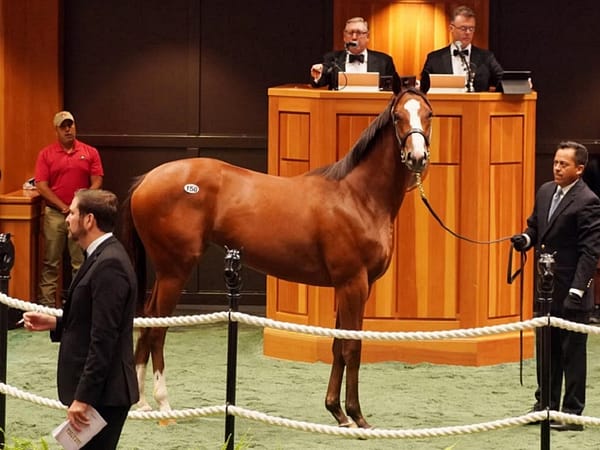 Into Mischief added two more $1 million-plus juveniles to his list during Tuesday’s closing session of the Fasig-Tipton Saratoga Yearling sale, bring his total to four for the two-day auction.

Leading the way on Tuesday was hip No. 150, a filly consigned by Gainesway, agent for breeder Don Alberto Corporation. The winning bidder was Kohki Maeda, at $1.2 million.

The bay filly is the second foal out of Test S. (G1) winner Paola Queen. This is a deep female family with the first three dams all stakes winners, and her third dam Raw Gold, a Grade 2 winner, is a sister to Grade 1 winner Point Ashley.

Not long afterwards, hip No. 166 came through the ring and brought a top bid of $1 million from Live Oak Plantation’s Charlotte Weber. The bay filly was also consigned by Gainesway, agent for breeders Bridlewood Farm and Happy Alter.

“She is beautifully balanced,” Weber said of her new stable addition. “She has a nice walk. She has great prospects as a racehorse and a broodmare.”

She certainly has the credentials, being out of the Alter-trained Curlin’s Approval, who won a trio of graded stakes. This is her second foal.

Into Mischief wrapped up the auction with an average price of $680,445 from 11 lots sold.