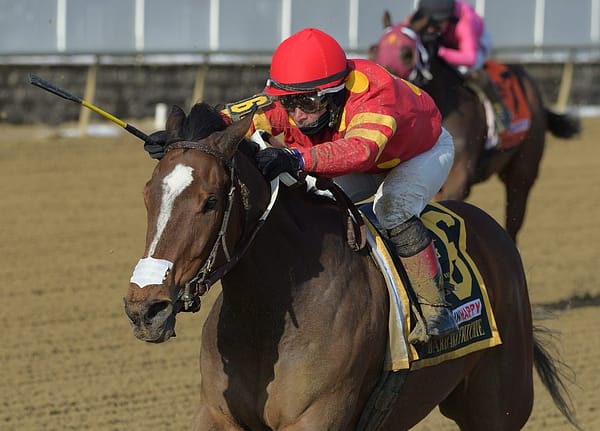 The 6-year-old mare has made just eight starts and didn’t begin her career until the autumn of her 4-year-old season. She is now 3-2-2 and has earned $246,561 for owner/breeders Edward Seltzer and Beverly Anderson.

Hibiscus Punch was the first of two stakes winners Saturday for Into Mischief, who now has 10 this year after tallying a total of 29 during 2020.

Hibiscus Punch, in post three, tracked a pair of dueling front-runners through a half-mile in a solid :45.51. Making a three-wide move nearing the stretch, she blew by Hello Beautiful and opened up a three-length lead. She continued to roll down the lane and defeated Estilo Tanentoso easily to stop the timer in 1:23.16 for the seven furlongs on a fast track.

“I felt like I can win this race because I talked to (trainer) Justin Nixon when I breezed her last time. She breezed really easy and I told him this filly is good,” jockey Horacio Karamanos said. “Last time when we won (in a Jan. 17 allowance at Laurel), I said, ‘She’s got them,’ so I felt very confident. When I sat behind them and I asked her, she came running.”

“We’ll have to talk with Mr. Seltzer and Beverly [about what’s next] and whatever they decide, we’re thrilled,” Nixon added. “They’re so patient and they’re such great people to train for. Really it was their doing, this filly.”