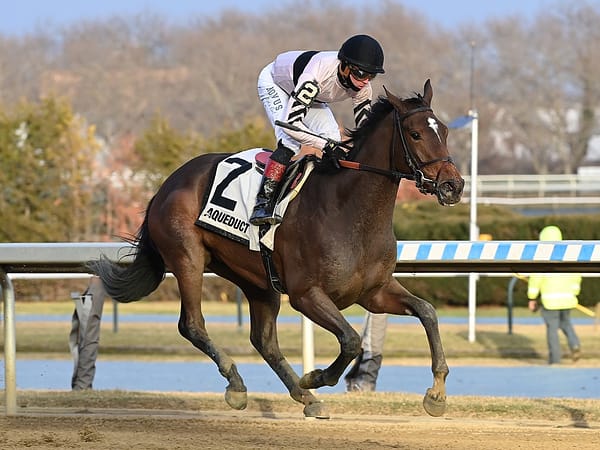 Occult cruises to victory in the 2023 Busanda S. – Chelsea Durand/NYRA

Occult passed her two-turn test with flying colors in Saturday’s 1 1/18-mile Busanda S., rolling home a 3 ¾-length winner in what was also the first stakes start for the 3-year-old Into Mischief filly.

Occult showed speed out of the gate under Dylan Davis, but when Sweetest Princess was intent on getting to the front, Occult settled nicely and tracked the pacesetter through a half-mile in :48.77. Occult ranged up around the turn and took command with a quarter-mile to run. With a burst at the top of the lane, Occult made it a one-horse race in the stretch to win easily.

“I thought Dylan used great judgment to just secure that second stalking spot out in the clear,” trainer Chad Brown said. “From there, it seemed like she was always traveling well and she had the jump on the other two main competitors in the race right behind her.”

As a qualifying event for the May 5 Kentucky Oaks (G1), Occult garnered the winner’s share of 20 points toward a spot in the starting gate at Churchill Downs.

“I’ll see how she comes out of this and go from there. She’s a work in progress and to her credit, she’s got two wins in three starts and it was her first start around two turns and she handled it fine,” Brown said.

Occult was bred by Peter Blum Thoroughbreds LLC and is a sister to stakes winners Magical and Exulting. The dark bay filly sold for $625,000 at the 2021 Keeneland September Yearling sale.