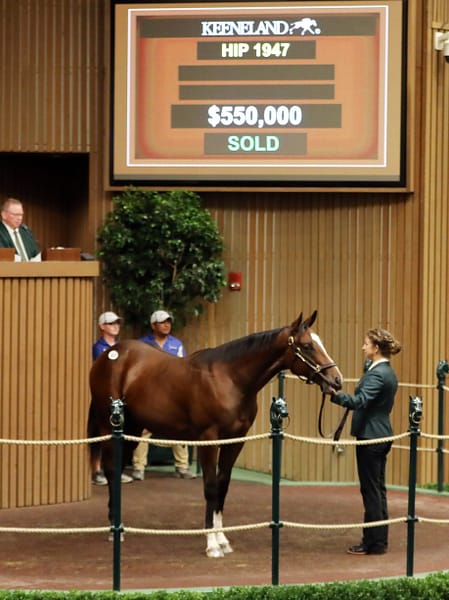 Centennial Farms went home with the fast-looking $450,000 colt out of the Candy Ride (Arg) mare Waltzing. Consigned by Hunter Valley Farm, he was bred by St. Elias Stables.

Maverick Racing and Siena Farm purchased the $375,000 colt out of the Scat Daddy mare Jersey Jules, from the consignment of Hunter Valley Farm which is also the breeder along with Fergus Galvin, Baroda Stud & DVR Bloodstock.

Earlier in the session, Hip 1200 kicked off the weekend by hammering for $300,000 to Klaravich Stable. The colt out of the Tiznow mare Smile More was bred by Upson Downs Farm – also consignor – and Louis W. Wright.

On Sunday, the momentum continued with Hip 1615 starting the day by selling for $390,000 to Fujii Kosan Co. Ltd. The colt out of the Speightstown mare Speightstastic was bred by Cove Springs.

The biggest boom came late Sunday, with Hip 1947 closing the stellar weekend with an impressive final bid of $55o,ooo to Muir Hut Stables. The grand-looking colt was bred by McKenzie Bloodstock and consigned by Paramount Sales.

Mitole has had 30 first-crop yearlings successfully clear the sales ring through Book Three of the sale, with an average of $168,333. With 11 yearlings kicking off Book Four on Monday, Mitole will look to continue the momentum through the final week of the September sale.