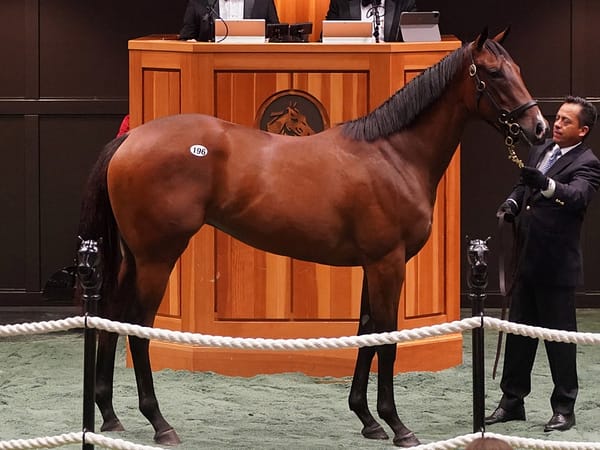 After some some very good results during Monday’s opening session of the Fasig-Tipton Saratoga Yearling sale, First-Crop sire Omaha Beach turned in even better numbers during Tuesday’s closing session of the prestigious auction.

Tuesday’s excellent results were led by hip No. 196, a filly consigned by Eaton Sales and purchased for $500,000 by Lael Stables. The bay filly is out of Glory Gold and is a half-sister to multiple stakes winners Espresso Shot and Venti Valentine.

Omaha Beach followed that result shortly after with a $400,000 filly, hip No. 205 consigned by Brookdale Sales, agent, with Taylor Creek the winning bidder. The dark bay Kentucky-bred is out of the Medaglia d’Oro mare Hot Water, whose prior runners include Grade 3 winner Scalding, stakes winner Tracksmith, and stakes-placed Tortuga.

Monday’s results were topped by a $350,000 filly purchased by White Birch Farm.

Omaha Beach’s first lot to sell was hip No. 67, consigned by Mill Ridge Sales, agent. The winning bidder at $200,000 was L S I Stables. The dark bay colt is out of Savannah Sky, whose dam Diaphanous is a sister to champion Banshee Breeze.

Omaha Beach, who earned more than $1.6 million in his racing career, won the Arkansas Derby, Santa Anita Sprint Championship and Malibu S., all Grade 1 events, during his 3-year-old campaign. He covered 215 mares in each of his first two seasons and stood for $30,000 live foal this year.