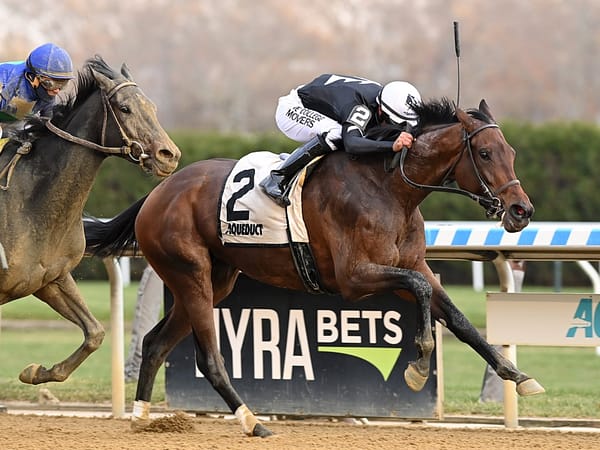 Spendthrift Farm and My Racehorse Stable’s Sixtythreecaliber prevailed by a half-length over multiple graded winner Kathleen O. in the $175,000 Comely S. (G3) Saturday at Aqueduct

The victory was the third straight win for the 3-year-old filly and her second consecutive stakes win.

Sixtythreecaliber took up a spot in second, with Tizzy in the Sky leading the way, as the field of seven made their way around the turn. The top two positions remained unchanged through six furlongs in 1:15.06. Sixtythreecaliber moved up and took the lead just outside the quarter pole. Kathleen O., who was far back early, made a late run, but came up short as the winner dug in gamely in the final strides.

“She’s a horse that has started—with all due respect to the other racetracks—in more minor league types of races, speaking comparatively to the New York racing circuit. But she is certainly no minor league horse,” winning trainer Tom Amoss said. “She used those races to build confidence, and it showed up today.”

The victory gave Sixtythreecaliber a record of 5-0-0 in seven starts and upped her earnings to $269,532.