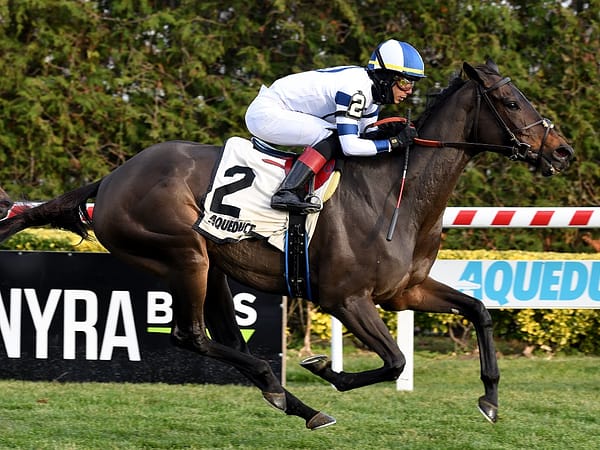 A month after winning Keeneland’s Dowager S. (G3), Temple City Terror made it back-to-back graded wins with a commanding performance in the $300,000 Long Island S. (G3) at Aqueduct on Nov. 25.

The 6-year-old daughter of Temple City has faced stakes company in many of her 29 career starts, and has compiled a record of 7-5-5, four of those wins coming in stakes company, with earnings of $861,218.

The turf marathon specialist was last of six for most of the first mile of the 11 furlong contest. She deftly made her way closer to the lead along the fence while rounding the final of three turns. She then swung out wide and easily went by Rocky Sky in mid-stretch to win going away by 1 ½-lengths.

“As she’s gotten older, she’s gotten much better,” said trainer Brendan Walsh.“ Jose (Ortiz) gave her a great ride and she did it quite easily, really.”

Temple City Terror is owned by Town and Country Racing LLC and was bred in Kentucky by Upson Downs Farm.

Temple City continue to prove to be one of the best values of any sire standing for $10,000 or less in America. This year he has accounted for nine stakes winners, five of them graded winners. He will stand the 2023 season at Spendthrift Farm for $5,000 live foal.