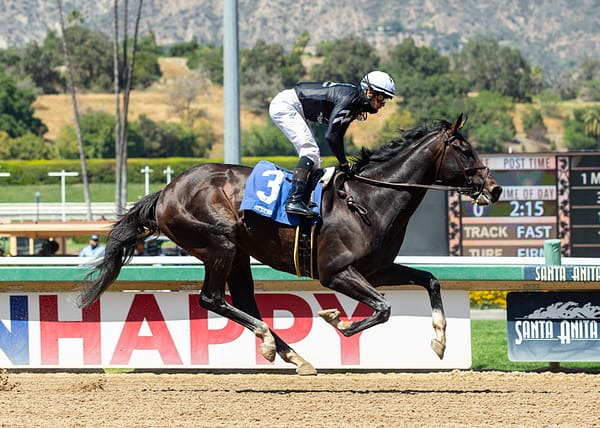 MyRacehorse and Spendthrift Farm’s Tizamagician got his first graded stakes victory in emphatic style Sunday at Santa Anita Park with a dominating nine-length victory in the $100,000 Tokyo City Cup (G3).

Second in this same race when it was run in September last year, Tizamagician overwhelmed his competition on Sunday. Zestful set the pace for the first mile, which went in 1:38.66, with Tizamagician in second. Flavien Prat sent Tizamagician to the front with three furlongs to go, and the dark bay easily took control and was all alone in the stretch as he cantered under the wire in 2:32.45 for the 1 ½-miles on a fast main track.

“Not only does (the MyRacehorse syndicate) create people to own a piece of the horse, but they all have friends and the idea is, if they get their friends, they get people into racing and that’s what we need,” said trainer Richard Mandella. “We need people here, it’s not the same without them.  It’s so strange to win races and nobody is here to cheer and celebrate with.  It means everything in the world that people are here.”