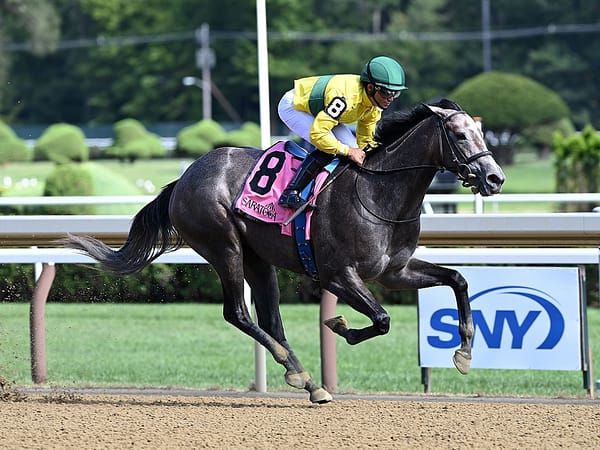 Maple Leaf Mel is all alone at the finish of the Seeking the Ante S. – NYRA photo

Maple Leaf Mel showed her heels to the field soon after the break of the $200,000 Seeking the Ante S. Friday at Saratoga and never looked back, crossing under the wire a 3 ½-length winner.

The 2-year-old daughter of Cross Traffic was making her stakes debut following a five-length debut maiden win over the same surface on Aug. 10.

Song Parody broke quickest of all in Friday’s 6 ½-furlong contest, but Maple Leaf Mel soon took command and led by a length after a quarter-mile in :21.74. She skipped over the sloppy surface and turned away eventual second-place finisher Lady Mine at the top of the stretch, drawing away smartly in the lane to win geared down late.

Maple Leaf Mel is out of City Gift, also the dam of stakes-placed Eddie’s Gift. She was bred by Joe Fafone.

Cross Traffic, who was the champion First-Crop sire, is responsible for this year’s multiple stakes winners Dame Plata and Ny Traffic, the latter who was narrowly beaten in the 2020 Haskell S. (G1), as well as the graded stakes-placed 2-year-old filly Sabra Tuff.