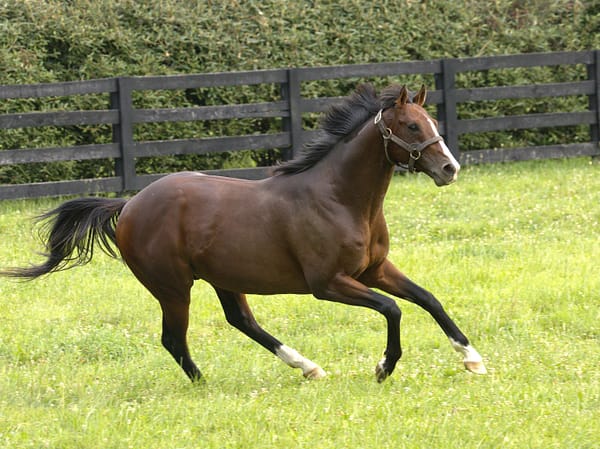 Spendthrift Farm’s Basin, winner of Saratoga’s Hopeful S. (G1) as a 2-year-old, sired his first reported foal on January 17th when a filly was born at Hardin Farm in Paris, KY.

Bred by Patrick Crowley, the dark bay filly is the first foal out of the Honor Code mare Dressed Up.

Campaigned by Jackpot Farm, Basin broke his maiden at Saratoga before going on to score a runaway 6 ½-length victory in the meet’s premier race for 2-year-old colts – the Grade 1 Hopeful.

As a 3-year-old, Basin began the year on the Kentucky Derby trail, finishing runner-up to Charlatan in the Arkansas Derby (G1) after hitting the board behind Nadal in the Rebel Stakes (G2) at Oaklawn.

The first Grade 1 winner by Liam’s Map, Basin hails from the multiple stakes-producing Johannesburg mare, Appenzell. An earner of $573,640, Basin is set to stand his second season at stud for a fee of $5,000 S&N.

For more information about Basin, please contact Des, Mark, or Brian at Spendthrift at 859-294-0030.