Going to Vegas the first Grade 1 winner for Goldencents 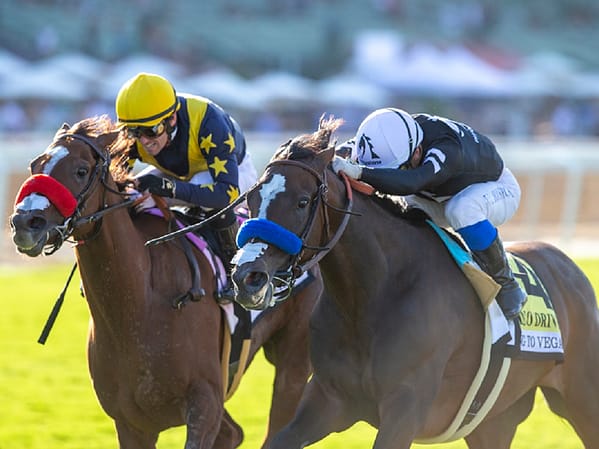 Goldencents, currently the leading Fourth-Crop sire in North America, added another milestone to his stellar stallion career on Oct. 2 when Going to Vegas went gate-to-wire to capture the $300,000 Rodeo Drive S. (G1) at Santa Anita Park.

With the victory, the 4-year-old filly became her sire’s first Grade 1 winner and also earned herself a trip to the Breeders’ Cup Filly and Mare Turf (G1), next month at Del Mar, as part of the Breeders’ Cup’s “Win and You’re In” Challenge Series.

Going to Vegas, with Umberto Rispoli in the irons, went right to the front in the 1 ¼-mile contest. Without getting much pressure, she cruised through the first six furlongs in 1:13.49. Luck, the eventual second-place finisher, mounted a bid in upper stretch and made it close at the finish, but Going to Vegas held her off to win by a neck.

“Going to Vegas has the tactical speed and loves going a mile and a quarter and she showed it. It was a great ride by [Umberto],” said winning trainer Richard Baltas, who also conditions the runner-up.

Going to Vegas has had an excellent campaign this year, winning the John C. Mabee (G2) and Santa Ana S. (G3) prior to Saturday’s victory. Overall, she is 7-8-2 in 22 starts and has earned $634,151 for Abbondanza Racing, Medallion Racing and MyRacehorse.

The winner was bred by Kirk and Judy Robinson and is out of the multiple stakes winner Hard to Resist.

Goldencents sits atop the Fourth-Crop sire list with $6.3 in progeny earnings and also leads the list by stakes winners, graded stakes winners, winners and wins. Spendthrift recently announced his 2022 fee at $15,000 S&N.