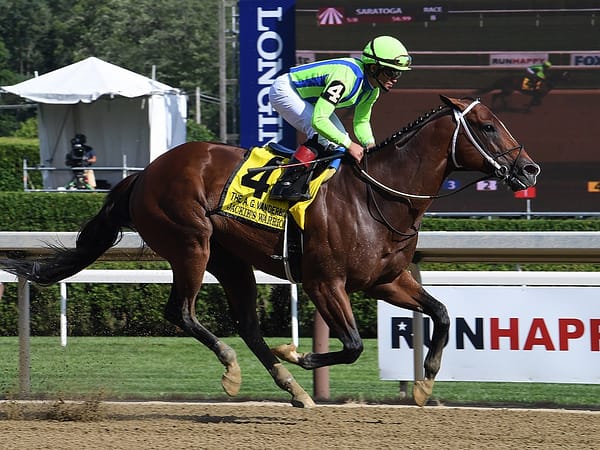 When Jackie’s Warrior won Saturday’s $350,000 Alfred G. Vanderbilt S. (G1), it marked the third year in a row that he has won a Grade 1 event at Saratoga, the first time a horse has accomplished that feat in the history of the storied racetrack.

Saturday’s win may have been When Jackie’s Warrior won Saturday’s $350,000 Alfred G. Vanderbilt S. (G1), it marked the third year in a row that he has won a Grade 1 event at Saratogathe most dominating of any of his 12 career wins, 11 of them in graded stakes. Though the margin of victory was just two lengths, he was never under any pressure at any point of the race, with jockey Joel Rosario sitting absolutely motionless on the 4-year-old colt. His final time of 1:09.74 for the six furlongs on the fast track earned a Beyer Speed Figure of 105, his sixth triple-digit number of his career.

“Unbelievably relieved,” trainer Steve Asmussen said in the winner’s circle. “Saratoga (and) the great racehorses that have won here, and he’s the only one to (win Grade 1’s three years in a row). I just can’t say how much I have wanted that for him. I wanted this more than you are supposed to want things. You can’t imagine how much this horse means to the barn.”

According to Asmussen, the plan is to run Jackie’s Warrior twice more – in the August 27 Forego S. (G1) at Saratoga, and then the Nov. 5 Breeders’ Cup Sprint (G1) at Keeneland, before joining the Spendthrift stallion roster.