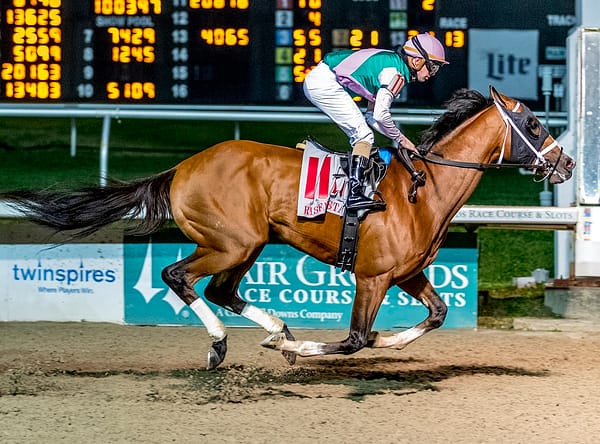 Champion sire Into Mischief got his second graded stakes winner of the day when Mandaloun fended off Proxy to win the $400,000 Risen Star S. (G2) by 1 ¼-lengths at Fair Grounds.

The win came just a few hours after Mischevious Alex turned in a sparkling performance to win the Gulfstream Park Sprint S. (G3).

Mandaloun, a Juddmonte Farms homebred, will be ranked among the top 3-year-olds after winning Saturday’s 1 1/8-mile Kentucky Derby (G1) prep. Breaking from post 10 in the 11-horse field, Mandaloun was hustled from the gate to take up a spot in third, while three-wide, going around the first turn. He was never more than two lengths from the front down the backstretch, then began to creep closer to the leaders on the final turn. Roused to the lead at the top of the stretch, the bay colt held sway while being hand-ridden to the wire.

“I think the blinkers did help out,” trainer Brad Cox said of an equipment change he made. “Florent immediately made a comment after the race. Much more focused in the post parade, more focused on his job.

The Risen Star is the first 2021 Kentucky Derby prep to award points toward the first Saturday in May on a 50-20-10-5 basis.

Next up for Mandaloun is most likely the $1 million Louisiana Derby (G2), also at Fair Grounds, on March 20, Cox said.

“He’s got the physical make-up of a mile-and-a-quarter horse so we’re optimistic he’ll get better with more ground,” Cox said.