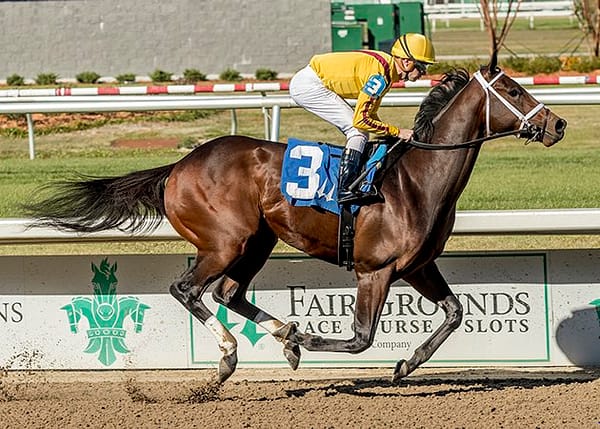 Corona Bolt earns a 97 Beyer in his 2-year-old finale. Next up: the 2023 Kentucky Derby Trail | Hodges photo

Trained by Brad Cox for Stonestreet Stables, the talented bay flashed good early speed before drawing off from his competition and finishing all alone at the wire of the six-furlong event. His final time was a crisp 1:09.96, cracking the 1:10 mark which is seldom seen from a juvenile at Fair Grounds. He earned an eye-popping 97 Beyer Speed Figure for the performance. Last month, Corona Bolt impressively won on debut against Maiden Special Weight company at Churchill Downs.

The win not only elevated Bolt d’Oro to the top of class by stakes winners from his first crop of 2-year-olds, it also extended his lead as the No. 1 Freshman Sire in North America by earnings. Heading into the final week of 2022, Bolt d’Oro ($2,645,973) holds a comfortable six-figure lead over Good Magic ($2,527,973).

Bred by Summerfield Sales Agency, Inc. & Etarip Stables, Corona Bolt was a $225,000 weanling purchase at Keeneland November. The exciting colt is likely to make his next start on the 2023 Kentucky Derby Trail.

“We’ll see how he comes out of this,” Cox said, “but based on today, I think he deserves the opportunity to try two turns. He’s a nice colt, he’s got enough scope about himself.”