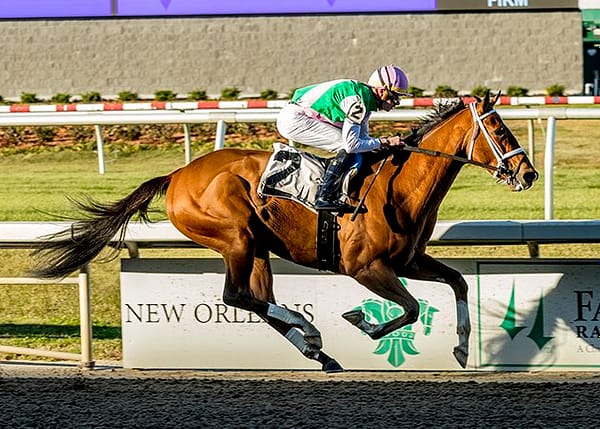 Into Mischief is in the prime of his historic stallion career, and reaching new heights is becoming a regular occurrence for the 3-time reigning champion General Sire.

On Dec. 26th, he had a pair of new promising 2-year-old stakes winners at Fair Grounds, with rising debutantes Dazzling Blue capturing the Letellier Memorial S. and Pretty Mischievous winning the Untapable S.

The undefeated Dazzling Blue followed up a flashy debut Maiden Special Weight win at Churchill last month with a dominant 3-length score in the $100,000 Letellier Memorial. Trained by Brad Cox for Juddmonte, the talented bay filly – which is out of the Curlin mare Blue Violet – is likely to make her next start as a 3-year-old on the 2023 Kentucky Oaks Trail.

“Overall, a big effort, she finished up well, kicked away late,” Cox said. “We’ll look to stretch her out a bit after today’s effort. Hopefully she can handle the two turns. Into Mischiefs can handle anything, and she’s out of Curlin mare. A big win for Juddmonte, and we’ll look to keep it going.”

Pretty Mischievous vaults onto the 2023 Kentucky Oaks Trail with a dominant win in the Untapable S. | Hodges photo

Dazzling Blue could meet Pretty Mischievous, who herself was impressive in victory in the two-turn Untapable, drawing off comfortably by 3 1/4 lengths. Trained by Brendan Walsh, the bay filly is a Godolphin homebred.

“She won sprinting early but (we) always thought that she would stretch out,” assistant trainer Paul Madden said about Pretty Mischievous. “She ran very well at Churchill (in the G2 Golden Rod) against a really good filly (Hoosier Philly). Brendan (Walsh) wasn’t sure about running in here, but she had a really good workout two weeks back and he said it’s time to run. She has a great pedigree. It’s a good win for Godolphin, a good day for the team, and I’m glad to be part of it.”